A recently published article reported the Center for Disease Control found that two adults from different households in Louisiana died from primary amebic meningoencephalitis (PAM) after using their household tap water in neti pots to irrigate and clean their sinuses.

PAM is an infection with a fatality rate of over 99% caused by the amoeba Naegleria fowleri (N. fowleri), often referred to as brain eating amoeba. The median time from the onset of symptoms to death is 5 days.

Although most cases have occurred in the south, the range of cases has expanded northward with cases reported in Minnesota, Kansas, and Virginia.

The CDC report on the Louisiana cases stated that the municipal water was treated with monochloramine, and that cultures developed from samples from the distribution system and point of entry of municipal water into the two residences returned negative results for N. fowleri.  The organism was found in tap water and neti pot samples in both homes.

While reading this I thought of all the outcry to eliminate the use of chlorine in drinking water; and the communities that are fighting proposals to safeguard public health by chlorinating their water.

Waterborne diseases such as cholera, typhoid, and dysentery have been virtually eliminated where water is treated with chlorine. The World Health Organization estimated in 2008 that over 4,000 people die each day from diarrhoeal diseases caused by contaminated water and lack of sanitation. Most of them are children under the age of 5 in developing countries.

The proven benefits of chlorination far outweigh any perceived benefits that can possibly be gained by avoiding, reducing or eliminating the use of free chlorine to disinfect drinking water. It's mind boggling that anyone would prefer to expose their families to the possibility of contracting a waterborne disease common in some developing countries or a rare infection such as PAM that can kill within 5 days.

Chlorine also provides residual protection from microorganisms beyond the point of treatment, in your home plumbing for example, something that ultraviolet and ozone treatment cannot.

The samples taken from the kitchen and bathroom faucets of one of the Louisiana cases, (the other wasn't tested), were found to contain a total chlorine residual that ranged from 0.0 to 0.02 mg/l . The expected residual in the distribution system is 0.2 to 4 mg/l.

These cases highlight the importance of the annual temporary switchover to free chlorine disinfection employed by many water systems.

Although free chlorine is a more effective disinfectant against more pathogens than monochloramine, concern over possible long term health effects from disinfection byproducts (DPB's) that form in the reaction of chlorine with organic materials is beginning to limit its use.

I still haven't seen a report that definitively proves that DPB's cause cancer or reproductive problems in humans. If somone has, please forward me a copy. As a country we've been chlorinating drinking water for over 100 years. During that time mortality rates have fallen, the population has boomed, even after factoring out immigration. If properly chlorinated drinking water was that dangerous wouldn't we have known that by now?

When it comes to public safety it's good to be cautious. But wholesale changes in drinking water disinfection shouldn't be made until we know the changes will be more effective than our current proven course of action.

On balance, suspected possible long term health problems don't outweigh the known harm of immediately life threatening pathogens that can occur in untreated or ineffecively treated water. I couldn't live with myself if my 4 and 6 year old grandsons died from PAM because they were just goofing around while taking a bath in "pure and natural" water, or water that potentially, might possibly, be found to cause problems in the future.

Would I like pure and natural water in my house? No thanks, pass me the chlorine, and make it free please.

Foxcroft Back to Ecuador: Step 1 Toward Reducing Water Losses

As mentioned in a previous post, Foxcroft assisted in providing a water meter test bench to the City of Ambato, Ecuador last September.

In January of 2012 we and representatives of the MARS Company, the test bench manufacturer, were pleased to visit and provide start up assistance for the system delivered just after Christmas.

The process started when officials with EP-EMAPA, the Municipal Drinking Water and Wastewater Company of Ambato, estimated the city was losing about $1 million dollars per year in drinking water revenue between meter tampering and inaccurate water meters.

Management decided the first step was to address the most widespread issue, questionable meter accuracy. Rather than continue past practices, he believed the city would be best served by conducting its own meter testing and upgrading to the latest technology built to meet AWWA recommendations and NIST Handbook 44 specifications.

Electro-Mechanical Systems Engineer Max Pico chose the MARS Model 5-1000, an automatic double row bench that can test up to (10) meters 5/8" through 1" in one row, and up to (5) 1-1/2" through 2" meters in the second row with 1/10 of 1% repeatable accuracy using the gravimetric method. The system included a 500 gallon stainless steel tank and a 10 gal / 100 gallon duplex stainless steel tank. The system was provided and installed by our partner Amimechanical S.A of Quito, Ecuador. 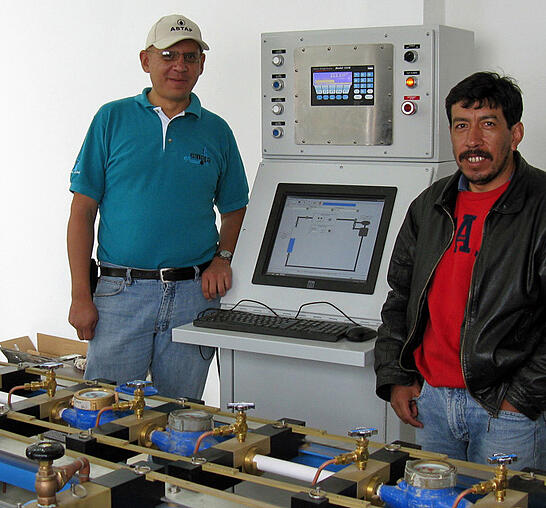 The test bench, which is compliant with ISO 4064 specifications, will help the city recover revenue lost to inaccurate water meters. In addition to testing the performance of their existing and newly purchased water meters, the bench will also provide valuable data to help evaluate future meter purchases. 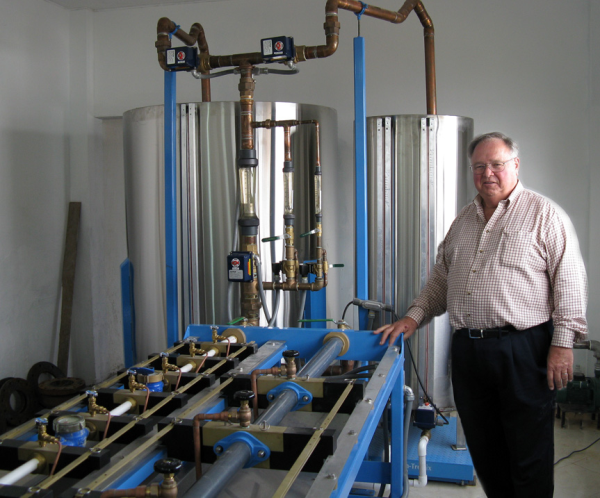 Since these test systems often pay for themselves in less than one year, we're looking forward to updates on how the test bench is contributing to their meter management program. 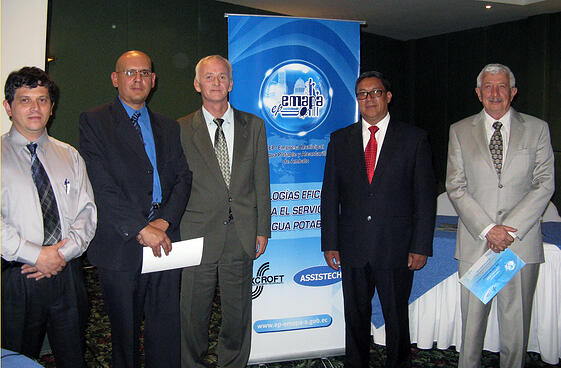